Larry Stone carves out his own piece of Oregon with an assist from Dominique Lafon.

In 2010, while Larry Stone was working at Evening Land in the Willamette Valley, he began negotiations for the 150-acre Janzen Farm, located in the Eola-Amity Hills. The prized east-facing site enjoys a 300-foot elevation gain, boasts favorable Nekia, Gelderman and Jory soils, and rubs shoulders with the likes of Argyle’s Lone Star, Domaine Serene’s Jerusalem Hill and Evening Land’s Seven Springs vineyards.  The beginning of all great wine is a vineyard with a unique, complex and exceptional expression of place.  It must be capable of expressing flavors in a way that pleases and surprises.  Sites like these are hard to define and even harder to acquire.  Because of its pedigree, the history of its neighbors, and the conditions it shares with its illustrious neighbors, it seemed like a place destined for greatness.

After a year and a half of negotiations with the Janzens, an agreement on all points was on the horizon. Then Larry departed Evening Land in early 2012 to return to help Chef Charlie Trotter during his last year in business.   When Trotter’s closed he realized the Janzen farm was still on the market and he decided to take advantage of the exciting opportunity to develop this site thoughtfully.  An opportunity like this was a chance of a lifetime.  The sale closed exactly at 4 p.m. on December 31st, 2012, and Larry became the new owner of the Janzen Farm. A farm that had been sought for over 40 years by the finest names in Oregon winemaking was now in his hands to develop.

Twenty-three blocks were planned with different combinations of rootstock and budwood to reflect the varying soil conditions within the vineyard. From the beginning, Lingua Franca Estate has been farmed on low-impact, Organic and Biodynamic principles, practices that were later improved with the advice and guidance of Mimi Casteel. Today, Lingua Franca is training its own dedicated vineyard team in specialized farming and pruning methods led by Vineyard Manager Brandon Hasart. 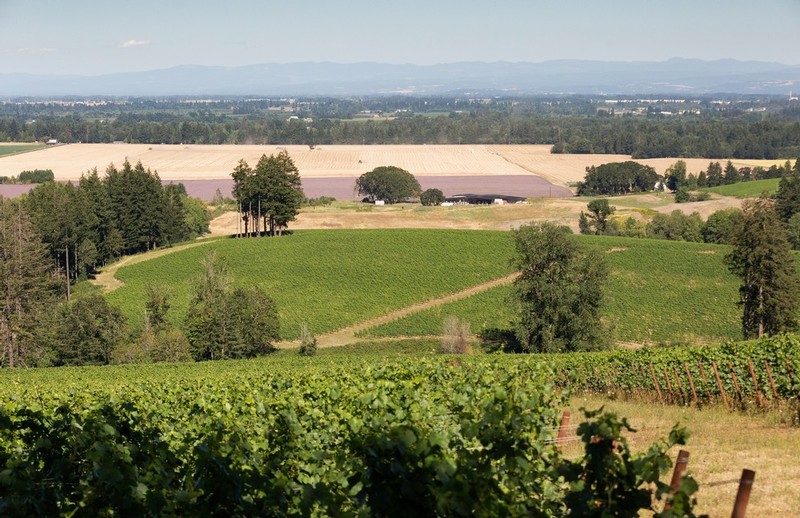 It was important from the beginning to respect the biome, the native flora and fauna. Thoughtful farming was one part of it. No-till farming with a permanent cover crop improves soil structure and increases microbial and mycorrhizal activity. Mycorrhizal fungi are like super-highways for nutrients and water, transporting them over a distance to where they are needed most. The nesting of hawks and owls was encouraged, not only because they are beautiful, but because they are effective hunters, keeping the songbird activity in check and at controlling voles and mice. Foxes and coyotes in the area reduce rabbit and pocket gopher populations. With this level of biodiversity in our environment, we feel that we gain better health in our workers and vineyards, and more complex flavors in the wines. Importantly, it is much more satisfying to live in such an environment among a throng of living animals and plants in relative harmony.

Originally, the plan was only to sell fruit. Then Dominique Lafon took notice of the new vineyard. He suggested to Larry that instead of selling the fruit, he should try and make wine from what was undoubtedly an exceptional site. In late 2014, Dominique indicated that he would be interested in collaborating on the project and the team began work together in February of 2015. This was also the time that Lafon protégé, Thomas Savre, with experience in some of the most illustrious places in Burgundy, joined in the venture that had been christened “Lingua Franca.”

The first harvest began very early, in late August 2015.  We made our wine at a custom crush facility, as we had no winery yet. Though the summer was hot, it cooled in time for harvest , and picking went very easily. The team was small and dedicated, composed of Thomas Savre, Junichi Fujita, Josh Wludyka, Siri Stone, David Honig, Nancy Stone-Nilsen and Larry.  The wines were outstanding, but we realized that as we grew our own fruit,  we would need a facility capable of handling the grapes with more precision.  There was no option but to build a facility from the ground up.

The Name “Lingua Franca”  is a universal language that can bring people from diverse backgrounds together sharing a moment of pleasure.  Lingua Franca, named after the Franks, was a universal language in the Middle Ages that could be understood by all and was used along the trade routes.  It was the language of diplomacy and brought people together from diverse cultures.  Lingua Franca also means to “speak frankly,” directly, just as our wines aim to speak directly of their terroir, their place.

Thank you for joining us on this journey!

Sign up for the Lingua Franca Newsletter and stay up to date on the latest wine releases, events, and promotions.